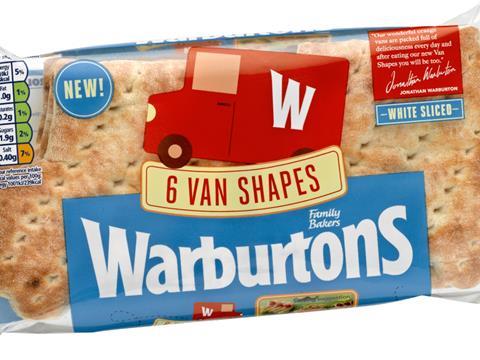 Warburtons is set to sink its claws deeper into the sandwich alternatives market with the launch of cat - and van - shaped bread Thins.

Rolling out from today (15 June), Warburtons Shapes will initially be available in Asda and Waitrose stores nationwide. They carry a £1.28 rsp for a pack of six, and will be offered on introductory price promotions after roll-out. Shapes would help to increase purchasing frequency among existing buyers and attract new shoppers to sandwich alternatives, said the baker.

“Families are a massive part of our business and these shapes will bring fun to the lunchbox,” said innovation director Darren Littler, adding it had taken 12 months to determine the best shapes for the launch, which is backed by PR and social media activity.

Littler added the range could be expanded, and that character licensing could be an option.

Sandwich alternatives such as thins and wraps are the strongest part of the otherwise beleaguered bread market. Overall value sales grew 13.1% in the year to 1 February [Kantar Worldpanel] versus a 5.4% slump in wrapped bread. Warburtons itself reported a £31m hike in sales of its own sandwich alternatives in 2014, driven by the sandwich thins. In contrast, its wrapped bread fell by £35m in the year to 28 March 2015 [IRI].

While the new Shapes products will be made at its site in Bristol, Warburtons has invested £20m in a new sandwich alternatives bakery in Burnley.