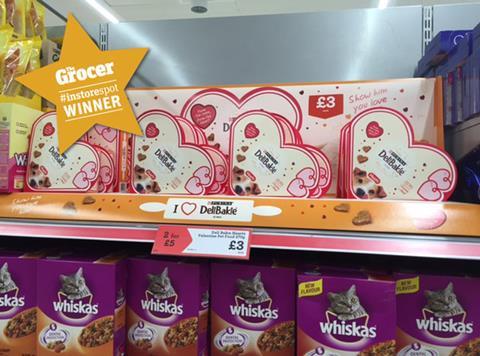 The judges have delivered their verdict on the Valentine’s Day #instorespot and have announced that the above image, from Morrisons Kirkstall in Leeds, is the winner.

Submitted by Russell Barrow from The PR Network, the Purina Delibakie doggie biscuits won over the judges due to its packaging and Valentine’s Day tie-in.

“We award the Instorespot award to Purina Delibakie for reminding us not only to love our partners but our pets too. A great initiative,” said Savvy chief executive Catherine Shuttleworth- one of our judges.

“Our own research indicated that we’d witness a ‘polarisation of spend this Valentine’s Day’ and I think the entries reflected that to some degree.

“It was disappointing though not to see more inspiring and engaging visuals at the top end, but the discounters - and smaller format stores especially - worked hard to maximise limited space and get creative. This not only worked well for shoppers, but also for us as judges!”

Our other judge, Kerry Foods shopper marketing director Sue McVie said: “the Purina Delibakie Doggie Biscuits were a worthy winner. It really tapped into the insight that everyone loves their pets and so it really engages on an emotional level with the shopper, thereby appealing to a broad market. It also stretches the growing ‘pet’ Christmas present occasion into new occasions and so seeks to drive an incremental purchase to increase frequency within the category.”

In total, we received 42 entries over email and twitter. Tesco in Baldock submitted their onstore projection, whilst Spar shops all over the country sent us their instore displays.

“We all wanted to also give a special mention to Spar – we received a number of store nominations for them so customers are recognising the efforts put into their small, but impactful displays,” said McCurrach chief executive Angus MacIver, another one of our judges.

“In particular well done to the team at Spar in Saintfield Road, Lisburn – the staff really went that extra mile with their fun picture. Tesco Baldock’s projection was also up there and engaged the local shoppers, but we couldn’t see the conversion to purchase angle. It would however be great to see more of this creativity across other Tesco locations next year.”