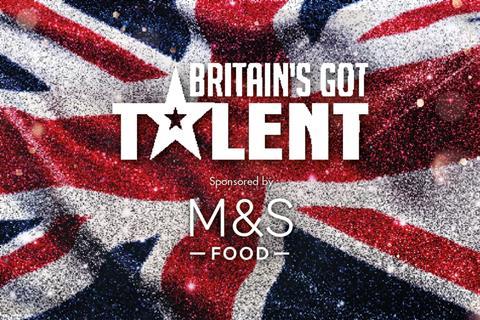 The TV ads will come alongside social media content

Marks & Spencer has revealed its first-ever headline TV sponsorship deal, which comes as part of its bid to reach more families.

The retailer will sponsor the 2019 series of ITV’s Britain’s Got Talent, which airs in the spring, to showcase its range of family-friendly and value-focused food products. These will include new items, sharing pizzas, healthy stir-fries and dishes from its vegan range Plant Kitchen, as well as well-known M&S lines such as Percy Pig sweets and Colin the Caterpillar cakes.

The campaign will consist of idents at the beginning and end of each show, and around the advert breaks during episodes, as well as on the ITV Hub catch-up service.

M&S has created a game on the Britain’s Got Talent app, which challenges players to prepare a meal and complete culinary tasks such as slicing a cherry pie and making an aromatic duck pancake. The app will also provide information about M&S’s food offers.

“What better way to get into the hearts and minds of Britain’s families than to team up with the biggest family show on TV?” said M&S food marketing director Sharry Cramond. “Through this partnership, we’ll be bringing M&S food into millions of homes each week, telling more families about our great value, great quality food and encouraging them to choose M&S for their Saturday night family dinner.”

ITV deputy commercial director Simon Daglish, added: “We’re thrilled that such a well-loved brand as M&S has chosen Britain’s Got Talent for its first-ever TV sponsorship. The brand new concept that we’ve developed with M&S enables them to showcase products from across their whole range throughout the series and bring something new to viewers each week.”