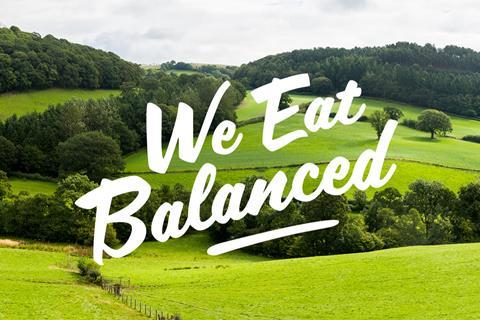 The previous iteration of the We Eat Balanced campaign was the subject of 487 complaints, none of which were upheld by the ASA

AHDB has announced the return of its We Eat Balanced meat and dairy campaign after complaints about by animal welfare and pro-vegan groups were rejected by the UK’s advertising watchdog.

Relaunched yesterday (6 September), the levy board said its marketing drive would once again emphasise that beef, pork, lamb and milk contain vitamin B12 – a nutrient it said was “not naturally present in a vegan diet”.

The push would also highlight the sustainability and standards of British meat and dairy, AHDB stated.

These messages would be displayed on supermarket shelves and aisle fins, through online advertising with MailOnline and full-page ads in the Guardian, as well as via social media.

Online and social content would include short videos of farmers “telling the story of British farming” AHDB added.

“After a successful pilot earlier this year, I’m delighted that our We Eat Balanced campaign [has returned] to give consumers further reassurance about the food choices they enjoy as part of a healthy, balanced diet,” said AHDB dairy strategy director Paul Flanagan.

He urged supporters to “spread the message on social media where you can”.

Revealing independent analysis of the results of its initial £1.5m campaign, which took place over seven weeks during January and February 2021, AHDB said its marketing activity was shown 80 million times on social media, reaching 10 million consumers.

It was also seen by six million people in the press and was viewed 2.5 million times on VOD services.

It comes a matter of weeks after the Advertising Standards Authority rejected 487 complaints about the previous iteration of AHDB’s campaign, which saw objections from organisations such as Compassion in World Farming UK and pro-vegan groups including the Humane League UK, The Vegan Society, Peta and Viva.

Complainants accused the adverts of being misleading in three ways, according to the ASA’s ruling.

What does the meteoric rise of plant-based mean for dairy?

They argued the ads “implied” that meat and dairy products were a necessity in order to follow a healthy, balanced diet, consume vitamin B12 and also that livestock used for meat in the UK was typically outdoor grazed and had a minimal environmental impact – things the complainants argued were not true.

However, the ASA referenced AHDB’s use of qualifying statements to “promote a varied diet and to clarify that meat and dairy consumption was not required”, as it ruled the complaints would not be upheld.

“We understood that meat and dairy products contained sufficient quantities of vitamin B12 and protein that the nutrition and health claims included in the ads were permitted to be made,” the ASA judgment said.

“Overall, we considered that the ads would be understood by consumers to mean that essential nutrients required for humans could be obtained from meat and dairy foods as part of a healthy and balanced diet,” the ASA added. The campaign “did not give a misleading impression that meat and dairy were required for a healthy and balanced diet” it added.

At the time, AHDB chief communications and market development officer Christine Watts said it was an “important day” for British farming “as we can continue to communicate the benefits around consuming red meat and dairy as part of a balanced diet”.