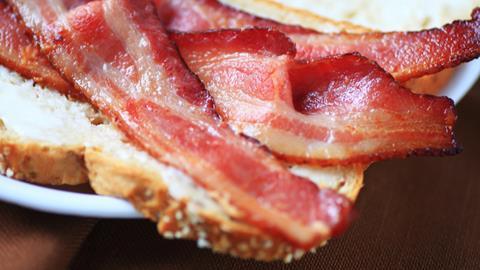 Treat the nitrites study with caution. It shows processors want to learn

You’re damned if you do and damned if you don’t. Or so meat processors must feel after The Observer this weekend published extracts of an industry-funded study into nitrites in processed meats.

The Observer claimed the ‘bombshell’ study showed “nitrites don’t protect against botulism – the chief reason ham and bacon manufacturers say they use the chemicals”. It suggested the industry had commissioned the ‘confidential’ report to prove the chemicals were necessary, and had hidden its findings when it showed otherwise.

It quoted Baroness Walmsley, the vice-chair of parliament’s all-party group on cancer, who described the report as “highly embarrassing” for the processed meat industry and the FSA, who have “persistently peddled the myth” that nitrites are essential to protect against botulism. Labour’s deputy leader Tom Watson, meanwhile, said it demonstrated there was “no longer any need for the processed meat industry to be adding cancer-causing nitrites”.

All of which is, in my mind, jumping the gun a bit.

Firstly, it’s important to keep in mind that The Observer has published an extract from a wider study. So there is very little context, and we don’t know whether there were other findings around the role that nitrites play in preserving meat.

Secondly, as BMPA boss Nick Allen pointed out, this study hasn’t yet been peer reviewed, so it’s not yet proof of anything. As it stands, the official advice from the European Food Safety Authority is still that nitrites can “hinder microbial growth, in particular to protect against botulism, as well as to keep meat red and enhance its flavour”.

Thirdly, let’s all keep in mind that this extract was leaked by someone who might have had an ulterior motive for doing so.

Last, but not least, even if these findings prove to be true and nitrites don’t protect against botulism – it’s a bit ridiculous to suggest the meat industry knew that all along but was adding them anyway.

Because, we have to ask ourselves, what on earth would meat processors have to gain from adding nitrites to bacon and ham if they don’t perform the function they are used for? Their intention is to make their products safer, not dangerous.

There is no doubting the meat industry needs to take the issue of nitrites in processed meat and their possible links to cancer seriously. But I’d argue the very existence of this study shows they are doing just that.

So rather than using this as another stick to bash them with, perhaps we should praise meat processors for trying to do the right thing, and better understand the role nitrites may or may not play in preserving food – as well as the possible implications of removing them.