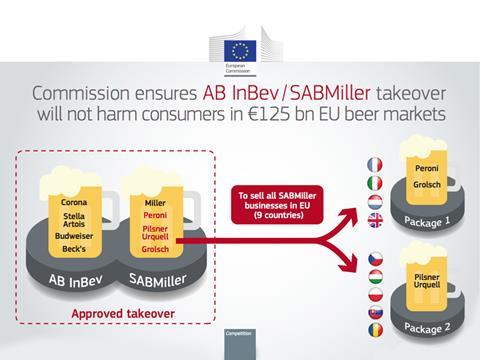 AB InBev (ABI) has taken a crucial further step towards completing its £71bn takeover of SAB Miller (SAB), with the European Commission having given the deal the green light on the condition almost all of SAB’s European businesses are sold off.

AB is already in the process of doing so, having struck a £2bn deal with Japan’s Asahi for the UK, Italian and Dutch businesses of SAB’s Grolsch and Peroni brands in mid-April, and announcing its intention to sell SAB’s Eastern and Central European businesses later that same month.

Commissioner Margrethe Vestager said the proposed merger had sparked concerns it would lead to higher beer prices in some European member states, but AB InBev had addressed this by agreeing to divest practically all of SAB’s beer business in Europe.

“Today’s decision will ensure that competition is not weakened in these markets and that EU consumers are not worse off. Europeans buy around €125 billion of beer every year, so even a relatively small price increase could cause considerable harm to consumers. It was therefore very important to ensure that AB InBev’s takeover of SABMiller did not reduce competition on European beer markets.”

The EC said the UK was one of the markets, along with Italy, the Netherlands, Romania and Hungary, where the merger would have ”removed an important competitor” either at the national beer market level or in important market segments. “In addition, this reduction of the number of competitors would have also increased the likelihood of tacit price coordination”, the EC said.

Carlos Brito, CEO of AB InBev said: “We are very pleased with the positive decision of the European Commission. With this clearance, we remain firmly on track for a closing in the second half of 2016.”

Following the divestments, “the only SAB business that ABI will retain in Europe is in the Canary Islands,” analysts at Société Générale noted.

SocGen said ABI had always recognised the deal would lead to high combined market shares in Italy, the Netherlands and the UK, but that its agreement to sell off its Eastern European brands, including Pilsner Urquell, was more surprising.

“ABI’s desperation to get the deal done means that it chose not to try to argue with the EC, or to volunteer to withdraw its own brands. The EC has not set any deadline for the disposals, but ABI will want to find a buyer for the Eastern European business without delay.”

AB InBev had now secured clearance for its mega deal in 14 jurisdictions.

The deal still requires approval from regulators in the US, South Africa and China. AB InBev has already agreed to divest key brands in the US and China to ease the regulatory approval process.