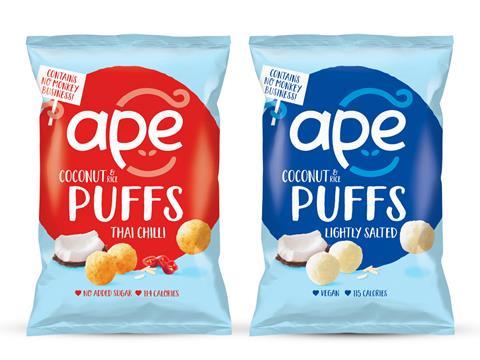 Ape has recently expanded its distribution into Europe

Coconut snacks startup Ape Snacks has been bought by a private investor, as interest in healthy snacking continues to surge.

Ape, which is listed in Tesco, Sainsbury’s and Asda, has been wholly acquired by the unnamed investor for an undisclosed sum.

The snack brand, which was advised on the deal by mid-market investment firm Alantra, recorded 600% revenue growth in the past two years.

The brand was launched in 2016 by university dropout Zack Nathan, after he recognised the booming potential in the healthy snack market. The business, which produces a range of vegan and gluten free products including coconut crisps, recently expanded its distribution into Europe.

The brand’s progress had been “a fantastic journey with incredibly rapid growth” said its 23-year-old founder. Nathan has exited the supplier as part of the deal, leaving to run a medical technology startup he founded earlier this year.

The sale of Ape for a “very sizable” figure had been “very opportunistic” he told The Grocer. “It made a tonne of sense. The price was great. The team will be looked after, and there’ll be money going into the business.”

Having resigned as sole director, Nathan has been replaced by Rebel Kitchen co-founder Benjamin Arbib, according to Companies House documents filed last week. A managing director is expected to be appointed by the end of the year, The Grocer understands.

Ape was “a great example of a UK food brand that has responded to increasing consumer demand for healthy ingredients and, as a result, has grown rapidly over the last three years” said Atlantra director Charles Lanceley, who advised on the deal.

“Investment in healthy products is one of the key trends underpinning food and drink M&A this year. While there is no shortage of healthy options available to consumers, the successful brands like Ape all share the crucial trait of combining a clean nutritional profile with amazing taste.”

The deal is the latest in the healthy snack sector, following Intersnack’s acquisition of Popchips and NVM private equity’s investment in Primal Pantry earlier this year.