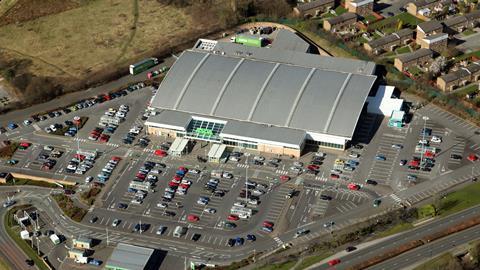 How will suitors to Asda shake up its vast estate?

One way or another property is going to be a big part of the Asda play for potential investors, say experts. The question is: how?

When Walmart International CEO Judith McKenna told 1,200 managers at her old stomping ground last May the US giant was seriously considering floating Asda on the stock exchange - a process set to take years - it was widely interpreted as a bid to flush out private equity dollars.

Less than a year later, a number of private equity names are now being linked. The Sunday Times reports talks with US-based private equity firm Lone Star, which specialises in undervalued real estate and has now 20 PE funds worth $85bn. Other PE firms in the running are said to include Apollo, TDR Apax Partners and KKR.

So what’s the appeal to these various parties? What are they likely to do to extract value from a deal? And what does it mean for Asda’s 600 stores and 145,000 employees?

Despite scepticism over Asda’s growth prospects, given the rise of the discounters, it seems investors are convinced there’s a potential bargain to be had. Certainly no one believes Walmart will get anything like the £7.3bn price tag associated with last year’s failed Sainsbury’s merger, but on the other hand, it does have 15% of the market. And crucially it owns the freehold on around 70% of its estate (second only to Morrisons).

“You can just see PE companies licking their lips at the prospect,” says Stephen Springham, head of retail research at Knight Frank.

Take Lone Star. In the UK it boasts UK residential property company Quintain, owner of one of London’s largest urban regeneration sites at Wembley Park, which has permission to build more than 7,000 houses near to the national football stadium - a hint of what is to come at large Asda sites, maybe?

Tom Edson, head of retail capital markets at Colliers, agrees: “My gut feeling is that property is going to be a big part of these talks.”

Asda would have the potential to generate upwards of £150m a year just from sale and lease backs of sites in the portfolio, Edson reckons, though he adds this would be just one of many potential options for raising finance.

Long income funds such as Aviva and M&G are likely to be interested too, he says.

“The fact they have such high ownership means there’s a myriad of ways private equity could sweat those assets.”

Indeed, one property source admits he would be “salivating” at the prospect of buying some of Asda’s prime stores if they came on the market.

“Asda has some cracking sites. There are stores that do amazing business, and especially if they are in an area where there is no big Tesco, they are going to be very attractive to investors,” says one property source.

The prospect of private equity players getting hold of the property portfolio doesn’t fill all property experts with joy, however.

Springham argues “retailers need to be run by retailers” and blames private equity for many of the retail disasters of late.

“Were it not for private equity would Debenhams be in the state it is now?” he asks. “I’m very dubious about what it could mean for Asda.”

Another property source says: “The question is what happens if these PE guys do strip the assets and things go wrong, and they end up going bust - is Walmart really going to bail them out?”

“My fear is they are more concerned at extracting cash than investing in the businesses.”

Yet Walmart has been accused of stripping talent and cash from these shores and some property experts believe fresh eyes may bring fresh opportunities.

“It doesn’t necessarily have to be a smash-and-grab raid. That money can be ploughed back into the retail proposition,” says Edson.

Rapleys retail partner Richard Curry warns that, while Asda may have lacked investment from Walmart, private equity could mean “passing from one devil to another”.

“They may think, look how much Walmart has taken out of it - we could do the same.”

But on balance, Curry believes a PE investor will see protecting Asda’s interests as the best way to add value for a subsequent buyer, as opposed to, say, a sale and lease-back programme. “Then you’re just inheriting a liability estate.”

He adds: “Over quite a period of time Asda has looked at ways of optimising their land.

“They’ve got many car parks where you could take a cab from one end to another.

“The obvious, quick solution would be to slap in McDonald’s drive-thrus, coffee drive-thrus.

“They could have gyms, a B&M store, and sell off a long leasehold on that part of it and let someone else do the work for you.”

A more flexible approach to the use of its space may also be behind the interest of EG. Its voracious appetite for expansion, including buying 800 Kroger c-stores in the US and 540 Woolworths sites in Australia, has seen it become a global business with about 5,200 sites across Europe, the US and Australia.

Asda would add another 300-plus petrol stations to its 500-strong estate and potentially give the owner brothers the opportunity to supply its convenience operations with Asda products.

“EG would see grocery as an adjacent play,” an industry source says. “With a convenience estate of their size, they could take Asda into this market in a big way in a single stroke while leveraging value from Asda’s sizeable forecourt estate in line with their core business.”

On the other hand, Asda’s automated fuel proposition and the low prices it charges at the fuel pumps is vastly different from the EG approach.

Crucially it’s not short of ambition or cash, says a senior convenience industry source. “It tried to buy Costa, and owns the European licence for Starbucks Drive Thru.

“It has some big investors behind it, who are interested in its entrepreneurial approach,” adds the source. “It will be interesting to see if it can do a better job than Asda in driving value through adding complementary services and franchisees on those estates.”