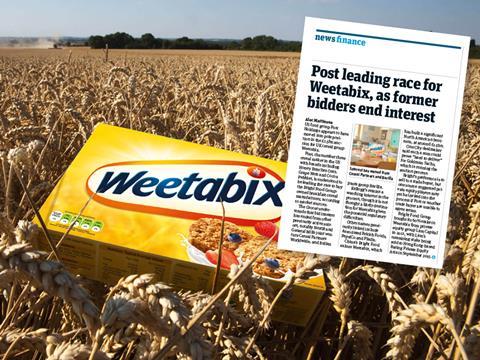 US cereal group Post Holdings has placed a £1.4bn bet on the post-Brexit opportunities for Weetabix in the brand’s home market.

As exclusively forecast by The Grocer on 3 March, Post sealed the £1.4bn takeover of Weetabix from China’s Bright Foods and Baring Private Equity Asia this week in a deal primarily focused on its core UK business.

“The core of their investment is all about a very successful UK business,” said Turrell. “They recognised we’ve got some fantastic brands here in the UK, which they believe they can help us invest in and continue to grow.”

Weetabix has grown exports in recent years, but its most recently filed accounts showed UK and Ireland revenues still made up over two thirds of sales by destination and almost 80% of manufacturing output.

In the year to 2 January 2016 Weetabix UK sales fell 2.4% to £350.8m amid its “most difficult [trading] period for a generation”. However, Turrell said Weetabix had outperformed the slowing cereals market in the UK in 2016, growing market share to 16.4% and core brands by 3% as well as “exponential” growth in its drinks business. “The core business is performing well,” he said. “We know we’re on trend nutritionally, we bring some great innovation and we’ve create a strong new subcategory with the On The Go drinks business.”

He added Post would invest to support Weetabix’s domestic growth plans and that CEO Rob Vitale was backing its existing £30m investment in Northampton announced in January.

Turrell said it would be “business as usual” in the UK, though marketing director Sally Abbott will become MD of Weetabix UK & Ireland, with Turrell shifting to a transitionary chairman role to help with integration, “My role is to help the transition be seamless and smooth so Post can be successful for the long term. I’ll be around for as long as Rob Vitale needs me.”

The buyout includes the entire Weetabix business, which exports to 90 markets worldwide and has established a number of joint ventures, including in Kenya and South Africa.

Post will also form a new joint venture in China alongside Bright Foods, a market in which Weetabix has been accused of failing to gain a strong foothold.

However, Turrell said: “We’re really pleased with our progress in China. We saw sales double last year and are now in 40 cities across the country, with 50 people on the ground working tirelessly to take our brands to consumers. It’s now our third largest market, so Post sees the potential and Bright Foods are joining up with them on that journey.”

Weetabix generated sales of almost £80m in North America in its most recent financial year - led by its Barbara’s brand in the US and Weetabix brand in Canada.

The Grocer revealed last month that Post, the number three cereal maker in the US, was leading the race to buy Weetabix, as other bidders dropped out, notably Nestlé and General Mills joint venture Cereal Partners Worldwide and Italian pasta group Barilla.

Turrell revealed he had been in talks with Vitale over a tie-up between Weetabix and Post for “almost a year”.

Globally, Weetabix’s sales, including joint ventures and its North American business, slipped 1.3% to £432.8m in the year to 2 January 2016 as private label sales plunged 12.2% amid the axing of a number of contracts, pricing pressures and the continued consumer shift from its traditional retail partners to the discounters.

Pre-tax profits at Weetabix Ltd fell 13.5% during the year to £94.3m. Holding company Latimer Newco 2, including the North American business, made a £221k pre-tax loss after a £359k profit in the previous year though operating profit edged up 0.7% to £46.5m.