Premier to seek 'over £100m' from Ambrosia sale, say analysts 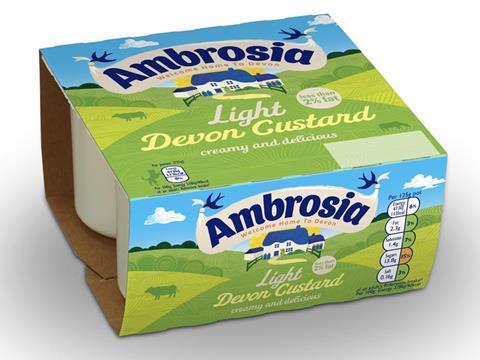 Premier Foods is believed to have put a price tag of “more than £100m” on Ambrosia amid interest from UK and global trade players.

The company confirmed plans to divest its third-largest brand on Tuesday 13 November, as CEO Gavin Darby announced he would depart in January 2019, following months of shareholder pressure.

Darby said funding from the sale would be used to both cut into its £509m net debt and for reinvestment in its faster-growing brands.

One City analyst told The Grocer, Premier would need at least £100m to make a sale viable to accelerate debt reduction, suggesting the supplier is likely to aim for a figure “between £130m and £140m”.

“To make a meaningful difference it has to take £100m off the debt. So they will have to get more than that as something will go towards pensions and reinvestment.”

Dairy Crest and Müller have been linked to the brand, but sources said the former was unlikely to stump up the cash. “The Lifton site is near Dairy Crest’s site in Davidstow, but I would question Dairy Crest because they haven’t got the money,” the City source said.

“They had a rights issue recently to raise money for capital expenditure down at their Davidstow cheese plant, and their debt was too high. If we are talking £140m for this, I don’t see where they are going to magic that money from.

“Müller are big in yoghurts and desserts, so it would fit with their dairy background and desserts branding, so that could be a sensible one.”

Ambrosia has seen a 5.7% sales decline to £81.3m for the year ended 26 May 2018 [Nielsen], but the outgoing boss described it as a “fabulous brand” with a long list of potential suitors.

Darby said he expected interest from UK and global desserts players who could expand Ambrosia into chilled or frozen. “I think it is potentially worth more to others than it is to Premier,” he added. “While we have got a fabulous innovation pipeline for the brand we are perhaps still a couple of years from being able to invest properly.”

The Ambrosia brand has made tentative steps towards internationalisation, with Premier agreeing a partnership with conglomerate Swire Group last year to test and launch Ambrosia rice pudding pots in Shanghai, China.

Darby said that, despite needing requiring significant funds, there “would not be a fire-sale” of Premier’s Assets, with Ambrosia the only brand currently on the market.

He announced this week he would be leaving the Mr Kipling maker Premier next year, after withstanding a brutal AGM in July after calls for his resignation and the sale of assets by activist shareholder Oasis Management.

Branded revenue grew by 0.5% to £296.9m as its branded grocery sales fell 2.1%, but sweet treats rose 7.4%. Ambrosia and gravy brand Bisto, saw the largest decline as they were most affected by the “prolonged period of hot weather”.

Premier also confirmed it intends to stockpile raw materials in run-up to Brexit amid fears over gridlock at UK ports.