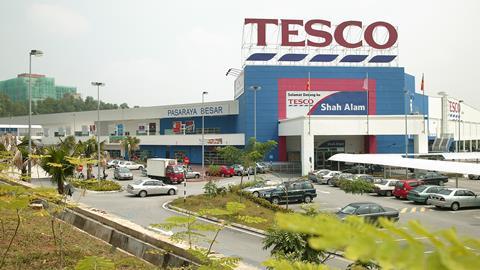 Tesco Thailand: analysts react to rumours of ‘jewel in the crown’ sale

Tesco’s share price soared when the London Stock Exchange opened on Monday morning as investors anticipated a potential windfall from a sale of the supermarket’s Asian business. The price rose more than 5% to almost 245p.

Tesco confirmed in a statement it had started a strategic review of its options for the businesses in Thailand and Malaysia after receiving an unsolicited approach from an unnamed party (reported to be regional billionaires).

Despite the company insisting the review was at an early stage and no decisions about the future had been made, excited shareholders weighed up the prospect of a dividend from a potentially weighty sale price, estimated to be between £6bn and £9bn by City analysts.

Tesco runs 1,965 Lotus stores in Thailand - and 73 in Malaysia - with a market share of about 28%. The business generated revenues of £4.9bn in the past year and earnings of £319m, which represented 7.6% of group sales and 12% of group EBIT. Profitability is expected to rise in the year ahead as it annualises benefits from restructuring.

The restructuring followed a blip for the Thai operations in 2018, with Tesco getting out of wholesaling in the country to focus on retail while also working with suppliers to sharpen prices in store, a model more in line with its lower everyday prices strategy in the UK. The moves contributed to a 29% fall in profits to £100m for the first half of the 2018/19 financial year. Sales in Thailand were also hit because of government-issued welfare cards that could only be used to buy groceries in locally owned supermarkets.

Clive Black at Shore Capital called the Thai business in particular “a jewel in Tesco’s crown”, with any interest in buying it likely to involve “substantial monetary sums”.

“The nature and extent of the inbound interest in acquiring Tesco’s operation in south east Asia has not yet been revealed,” Black said. “One can, however, see how a number of major trade, family office and private equity investors in Asia could be interested in this trophy asset. No doubt, regional and global bankers are now dusting off files and call lists as Tesco Asia could be considered to be ‘in-play’.”

The ShoreCap analyst noted, however, that the circumstances at Tesco were very different today than back in 2015 when CEO Dave Lewis sold the successful Korean business for £4bn to patch up an ailing balance sheet.

Ken Murphy has big shoes to fill – but is Tesco’s new growth strategy up to scratch?

“Tesco is no longer materially over-leveraged,” he added. “Indeed, we see a group that is now generating growing and attractive free cashflows that permit ongoing de-leveraging… and the commencement, in the not-too-distant future, of shareholder-friendly initiatives, be that a share buy-back, tender offers or special distributions. Hence, to us, for any approach to be accepted by the Tesco board for Thailand then it needs to be highly attractive, if not a knock-out price.”

Bruno Monteyne at Bernstein called the Thai operation “a great quality business”. He noted that 50% of earnings came from a high-multiple mall-rental business and the other half from the food retail market, which is “much less competitive than the UK”. The business still had “material organic growth opportunities”, he added.

Monteyne pointed out a drawback of selling in Asia would be to lose one of the few areas where there was potential for high ROIC (returns on invested capital) growth. He also noted that margins in Asia were about 6.7%, compared with below 3% in the UK.

But he said that if the valuation properly reflected those high returns and growth options, then selling the Asian business would make sense. And he added the Asian business was undervalued as part of the Tesco group, which trades on an enterprise value of 6.8x. In contrast, Thai supermarket competitor Big C was sold in 2016 at a multiple of 16x. Monteyne said a similar 16x multiple would value the Tesco Asian business at £8.9bn.

At HSBC, Andrew Porteous said the strategic review of options was “a sensible approach” by Tesco and one that should maximise shareholder value.

“Tesco have become a considered seller of assets, and in announcing a strategic review are allowing time for all potential parties to show interest,” he added. “The speculated price being discussed is $9.5bn (£7.2bn), which would be consistent with previous transactions in these markets.”

Porteous said a potential sale in Asia could refocus Tesco on driving growth in the UK, especially in light of new CEO Ken Murphy taking over from Dave Lewis next year.

“Were such a transaction to be completed, it would increase focus and urgency on reviving UK momentum and growth,” he said. “Europe is never likely to contribute positively to the investment case in a meaningful way until it is sold, leaving the focus resting on the UK business.

“The investment case and priority for the incoming CEO Ken Murphy would therefore become even clearer: to drive the UK business harder and improve growth.”

AJ Bell investment director Russ Mould agreed that getting out while the going was good could help management to sharpen its focus on the UK and would be another string in Dave Lewis’ bow.

“We already know that chief executive Dave Lewis is leaving the group next year after saying he had completed the business turnaround,” Mould said. “Striking a favourable deal in Asia would add another badge to his reputation as the man who saved Tesco and put it back on track.”

However, he added that a strategically better exit would be to get rid of the central European operations that generate greater sales than Asia but make smaller profits.

Mould noted, however, that Tesco’s shareholders were unlikely to object to a potential deal as long the price was right.

Porteous at HSBC said a sale would imply the potential for “significant shareholder returns”. “If Asia was sold for £7bn it would be transformative for the Tesco balance sheet and would raise the possibility of a significant amount of excess cash being returned to shareholders,” he added, “probably via special dividend, given the scale of the potential transaction.”

Black at Shore Capital agreed a distribution to shareholders, in the form of a share buyback or special dividend, was the likely destination for any proceeds from a potential deal, alongside further de-leveraging or possible complementary acquisition activity in areas such as foodservice.

He added: “That said, post any disposal of Asia, Tesco would be a group devoid of a growth piston in its engine. Time will tell.”