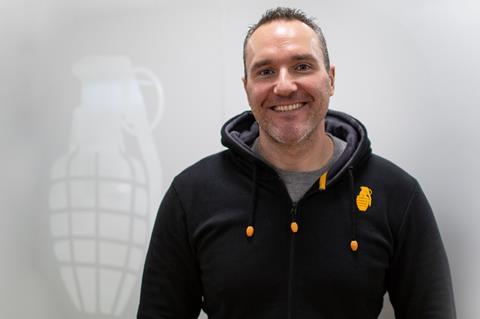 What was your first job? I worked for my dad who was a heavy goods vehicle mechanic, and I absolutely hated it, though I did learn I didn’t want to be a mechanic!

What’s been your worst job interview? I’ve always worked for myself so I’ve never actually had a job interview – just as well really as I’m pretty sure I’m unemployable.

What was the first music single you bought? It was actually an album: Bad by Michael Jackson.

How do you describe your job to your mates? I say I make chocolate for a living…

What is the most rewarding part of your job? There are lots, but I think seeing the brand and team develop beyond my wildest imagination, and achieving things that had never been done before in business.

What is the least rewarding part? I think the fact that I am never able to switch off. That’s something I’m trying to address though and I’m getting better at it.

What is your motto in life? Don’t do normal, never compromise on who you are, do it your way or not at all, embrace humour and humility, if you don’t love it, don’t do it. Ever.

If you were allowed one dream perk, what would it be? It would have to be a private jet.

Any phobias? Absolutely: spiders, confined spaces and falling from a great height, or a combination of all three.

If you could change one thing in grocery, what would it be? I would like to be able to help our retail partners make the right decisions faster.

What luxury would you have on a desert island? I’d like two please: the internet and a set of dumbbells.

What animal reflects your personality? I’m going to say a cat, predominantly because I prefer cats over dogs and they pretty much like to do their own thing.

What’s your favourite film? At the moment I would say it’s American Made with Tom Cruise.

Which celebrity would you most like to work with? I think it would be Tom Hardy. I think he’s an underrated actor and actually a really nice and humble guy.

What would your death row meal be? With calorie constraints out the way, I would have a monstrous McDonald’s. Because they’re so good at consistency I wouldn’t be disappointed.