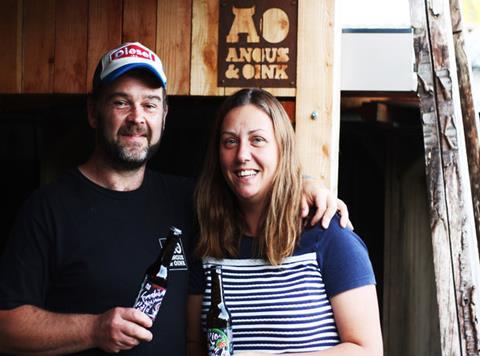 Unveiled as part of a strategy to encourage food pairing with beer, the NPD was produced in partnership with Glasgow-based experimental brewery Drygate Brewing, with an initial run of 700 bottles of each variant.

They are: Cocoa Chipotle Cartel, an oatmeal porter with a chocolate aroma and a hint of chipotle chilli (5.4% abv); Rio Passion Session, an IPA with a passionfruit finish (4.2% abv); and Tomahawk Red Indian Pale Ale, made with rye and tomahawk hops to give a ‘deep flavour with a bourbon hit’ (4.6% abv).

Guerrilla Brewing will officially launch during the Scottish Home Show this weekend (23 to 25 September) at the Aberdeen Exhibition and Conference Centre. Each bottle will be priced at £2.50 and will be available via the Angus & Oink website.

The new sub-brand was a “natural progression” for Angus & Oink, which produces hot sauces, rubs and sausages, according to co-founder Scott Fraser.

“We are devoted to the barbecue culture of the Southern states of the US and of South America, and want to present an all-encompassing barbecue product experience,” he said.

He and his fellow co-founder, his wife Malissa Fraser, chose Drygate Brewing to make the beer because they “wanted to work with innovative people who still thrive on producing small batch beer”.

Angus & Oink hoped to develop its range with Drygate and other craft brewers in the future.