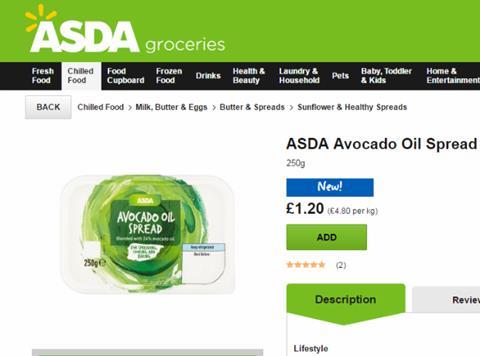 Asda and Waitrose have followed Tesco in responding to the boom in avocado and coconut sales by adding new avocado oil and coconut oil spreads to their own-label chilled ranges.

Dairy-free spreads containing 24% avocado oil - and a coconut version containing 21% coconut oil and 43% rapeseed oil - began rolling out into Asda and Waitrose stores at the end of June. They follow the launch by Tesco of the UK’s first avocado spread (alongside a coconut oil-based version) in May.

The products are being pitched as alternatives to butter and margarine, and come on the back of a surge in avocado sales last year, with value sales jumping by 25.9% and volumes up by 27.9% [Nielsen 52 w/e 10 October 2015].

Tesco had also experienced an increase in demand for the fruit of 40% over the past year, it said in May, with spreads buyer Dean Rawlinson stating “shoppers can’t get enough of avocados”.

Waitrose had launched its own versions of the spreads “as we are seeing a demand from our customers for more dairy-free goods”, a spokeswoman said.