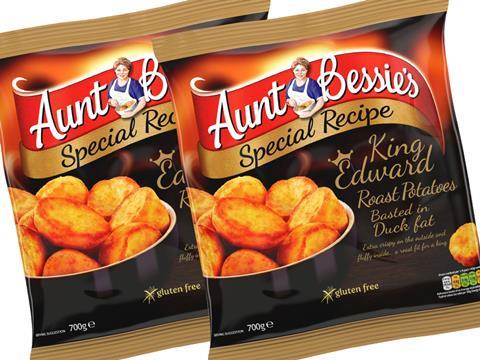 William Jackson Food Group has unveiled a raft of frozen launches under its Aunt Bessie’s brand - including its first potato NPD since ending its supply contract with Heinz.

The products are made by Belgian-based Agristo after Jackson’s decision last year to take management of the Aunt Bessie’s potato range in house. This marked the end of a licensing deal under which Heinz produced the products.

“The range showcases Aunt Bessie’s expertise in the potato sector - putting trends and insight at the forefront of our development,” said senior brand manager for potatoes Helena Young.

The brand is extending it York­shire puds range with Special Recipe puds that are larger than its standard puds.

Aunt Bessie’s is also teaming with Downton Abbey to promote its range with an on-pack promotion. Products will be temporarily rebranded as Mrs Patmore’s - after the Downton Abbey cook - with an image of the character replacing Aunt Bessie on pack.