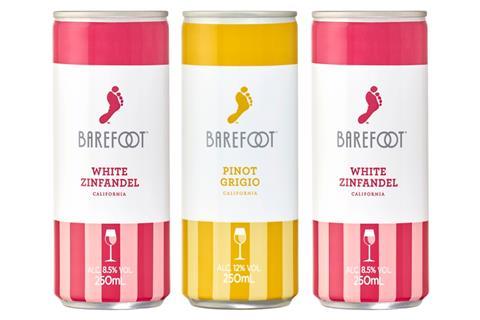 Barefoot is making a major move into cans, The Grocer can reveal.

The move makes Gallo the first major wine brand to fully embrace the format - though Echo Falls and Blossom Hill sell their Fruit Fusions and Spritz ranges in cans.

Gallo regional sales director Mark Stammers told The Grocer canned wine could “take the place of beer on the go” and would lure drinkers from the booming canned RTD category.

Barefoot had “a proven track record bringing new consumers into wine”, he said, adding there were “further extensions” in the pipeline.

“We have already seen huge growth in the US market in cans. This is just the start here - we’re still so heavily dominated by 75cl bottles.”

The launch will be backed by a digital campaign and sampling.

It comes as a slew of canned wine launches have hit UK supermarket shelves since the start of the year.

Fledgling brand Nice, for instance, hit Sainsbury’s in February, while French winery Mirabeau announced in January it had signed a major deal with Waitrose to stock its canned Rosé.

Retailers are getting in on the trend too: Aldi this month launched its own duo of canned sparkling wines.

Cans are generally seen as more ‘eco-friendly’ than glass bottles. Both are recyclable, but glass is heavier and racks up a higher carbon footprint during transportation.