Beefeater takes on Gordon's with launch of pink gin 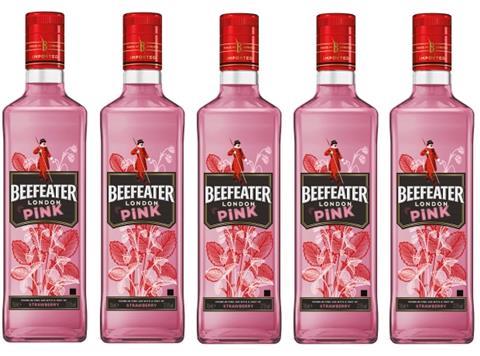 Beefeater is poised for a boozy battle with Gordon’s as the Pernod Ricard-owned brand readies the launch of its own pink gin.

Beefeater Pink (37.5% abv) is flavoured with strawberries, citrus and “classic” juniper botanicals. It will roll out from April priced at £18.99/70cl.

It marks the first launch from The Gin Hub, Pernod Ricard’s recently incorporated standalone gin division, which has taken full responsibility for Beefeater and fellow gin brands Plymouth and Seagram’s.

The NPD captured “what gin has become - a modern, vibrant category where consumers are not afraid to challenge the classics and conventions”, said Beefeater brand director Eric Sampers.

It looks set to compete with Diageo-owned Gordon’s Pink, which has dominated the booze aisles since its summer launch last year. Gordon’s pink tipple had already racked up more than £17m in value sales by the end of the year, becoming the UK’s sixth bestselling gin in a matter of months [Nielsen 52 w/e 30 December 2017].

Diageo followed it up this month by launching the tipple into a new 250ml RTD can with Schweppes tonic.

Meanwhile, Greenall’s posh Wild Berry Pink Gin has reported a 210% surge in sales year on year. Pinkster Gin, too, said its on and off-trade sales had doubled over the past 12 months.

“Thanks to Diageo’s recent, heavily backed foray into the pink gin arena, we can assume that this is a growing sub-category in its own right,” said Pinkster Gin director Will Holt. “The currency of millennial pink may wane in the fashion world, but it looks like it’s here to stay in the gin business.”

It comes as latest HMRC figures revealed the UK’s gin exports hit £530m - their highest point ever - in 2017, the equivalent of approximately 189 million 70cl bottles, prompting the Wine & Spirit Trade Association to call today for “more government support to increase exports to developed markets such as Australia, Japan, China and the US”.

The removal of tariffs would “allow Britain to maintain its position as the world’s largest spirits exporter and further boost the UK economy and provide more jobs,” said WSTA chief executive Miles Beale.