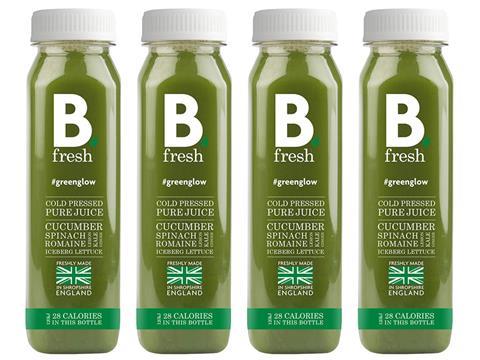 B.Fresh has launched a new green drink to meet consumer demand for a veg juice without celery.

The new #greenglow drink - which contains cucumber, spinach, romaine, iceberg lettuce, kale, lemon and ginger - launched online last week (rsp: £2.50) and has just been put out to retailers to sample.

Brand manager Katie Briggs said B.Fresh developed the flavour after receiving consumer feedback on its initial range of eight drinks, launched last November. “There was a lot of interest in our #leanandgreen juice, but some of our customers said they didn’t like ­celery,” she said.

Briggs said retailer feedback had been positive and consumer trials were “encouraging”.