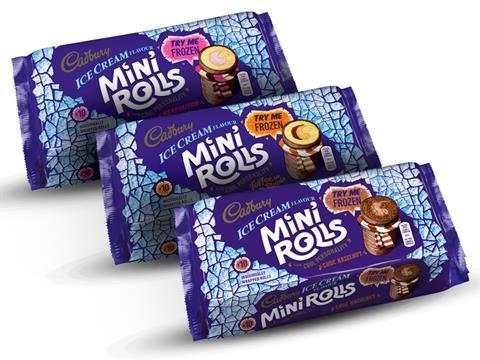 Premier Foods is bringing back its special edition Cadbury Ice Cream Flavour Mini Rolls, three years after first launching the range, as the supplier seeks to combat the traditional summer dip in sales of chocolate snacks.

Rolling out this month, the line-up sees the return of Toffee Ripple and Neapolitan flavours, and the addition of the new Chocolate Hazelnut. The launch will be supported by a £1.3m campaign. Last year’s Mini Rolls TV ad will return on 23 May, slightly altered and carrying the tagline ‘Rolled with Joy’ for six weeks.

“Having previously seen the special edition range deliver an incremental uplift in sales, this launch will continue to drive excitement within the category; particularly with the introduction of a new flavour,” said Jo Agnew, Cadbury cakes brand director.

“During the summer months there is a natural dip in chocolate sales, but we’re confident Cadbury Ice Cream Flavour Mini Rolls will excite shoppers and lead to more sales.”

Premier has also announced a packaging refresh for Peckish, in an effort to attract more health-conscious consumers to the rice-based snack brand.

“As a gluten-free, baked rice product that already has a loyal following, Peckish is perfectly placed to help retailers meet the consumer demand for lighter options,” said marketing controller Andy Smith. “Our new packaging carries a brighter design, which offers stand-out on shelf and clearly showcases these great flavours.”