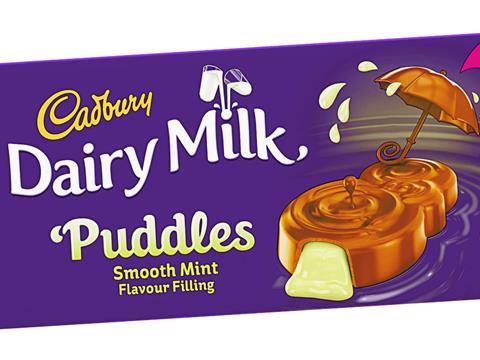 Why: Mondelez has expanded its Cadbury Dairy Milk brand with these 90g tablet bars, available in hazelnut and mint, and moulded with eight ‘puddles’ that contain a flowing filling. Mondelez said the innovation was targeted at the sharing market and designed to attract new, younger female consumers. Sales of Cadbury Dairy Milk slowed from double-digit growth in 2013 to just 0.4% last year [Nielsen] - Mondelez has said innovation such as Puddles will revive brand performance.

Consumer verdict: Puddles has made a splash, scoring 50 out of 50. The chocolate generated a high level of pre-trial interest, and high expectations were met, with the anticipated Cadbury chocolate standard delivered - and complemented by the minty filling. A small minority considered it not to be minty enough, but for the vast majority this ticked all the boxes. It performed even better than CDM Marvellous Creations Jelly Popping Candy, which scored 47. Some 90% claimed they would definitely or probably buy it.

Better than what’s out there:85%