CaféPod adds Downtown coffee range as it goes beyond pods 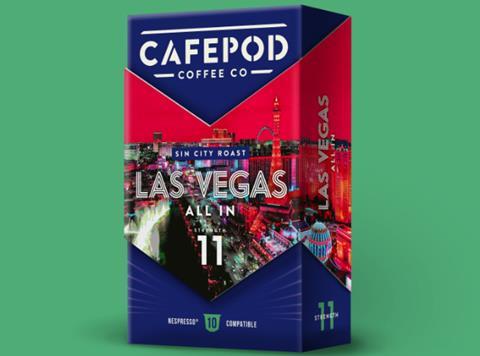 CaféPod is taking cues from craft beer for a posh new coffee range – as the business makes its debut in bagged ground coffee and beans.

The brand aims to add “fun” to the coffee segment with its premium Downtown lineup, each named after an “epic place to have a coffee”. Variants are Las Vegas All In, Brooklyn Hustle, Tokyo ‘Til Dawn and Havana Revolution.

CaféPod had “taken inspiration from the brewery world” for Downtown’s names and look, said co-founder Peter Grainger. “These are a break from the norm of how coffee is done in the UK.”

The NPD is scheduled to be in the mults from the end of July in recyclable Nespresso-compatible pods, whole beans and ground coffee.

This summer marks CaféPod’s first move beyond pods, having been the first business in 2012 to launch Nespresso-compatible capsules into UK grocery. The brand has already begun rollout of its core seven blends across pod, ground and bean in colourful new packaging. Caffeine levels vary from Supercharger down to Decaf.

The relaunch – including the introduction of a “category first” 50-pod pack – was aimed at satisfying shoppers’ need states rather than underlining the coffee’s provenance and credentials, said Grainger, who expects CaféPod’s entire portfolio to generate sales of £14m over the next 12 months.

Last year the brand, which already has several SKUs in each of the major mults, enjoyed a 43.4% rise in value sales to £6.2m [Nielsen 52 w/e 9 September 2017] as shoppers became more open to newer formats like capsules. It was the seventh biggest seller in roast and ground coffee.

“Our aim is to be number one in grocery,” said Grainger, “which is pretty ballsy considering the players around us.”