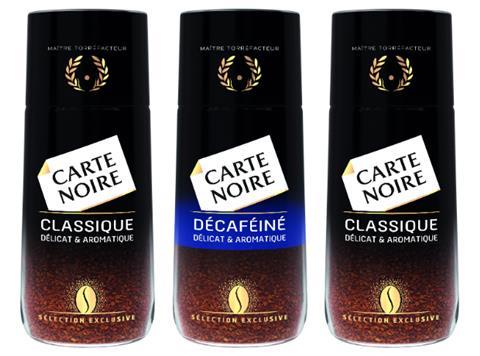 Variants with a “rounder and smoother” flavour are being rolled out as Lavazza eyes £42m of annual sales within the first two years of the instant coffee’s return.

Lavazza took control of the Carte Noire instant trademark earlier this year. Following the £3.5bn merger in 2015 between Douwe Egberts and the coffee division of Mondelez, an EC competition decision demanded the new JDE entity sell the Carte Noire brand.

It was acquired by Lavazza in March 2016, but the EC ruling allowed JDE to license Carte Noire instant for two years. This was “for rebranding purposes” according to JDE. However, the company chose to phase out the Carte Noire instant brand, focusing instead on a UK launch of its L’OR brand in January 2017.

Carte Noire had been “missed by UK shoppers” over the past 15 months, said Lavazza sales director for retail Matthew Case. Its return marked “a significant opportunity” for the supplier and the UK coffee category.

Two blends, Classique and Décaféiné, are landing on shelves now in new-look jars and refill packs (rsp: £3.99-£6.99/100g-200g). They offer a similar taste profile as previous iterations but now have “more mainstream appeal” Case told The Grocer. NPD is expected over the coming two years.

The relaunch will be backed by ‘True Love Waits’, a £3.5m push starting with digital and arriving on TV in October. “A lot of shoppers left the category when Carte Noire instant was removed,” Case said. “So the opportunity is there to regain these shoppers.”