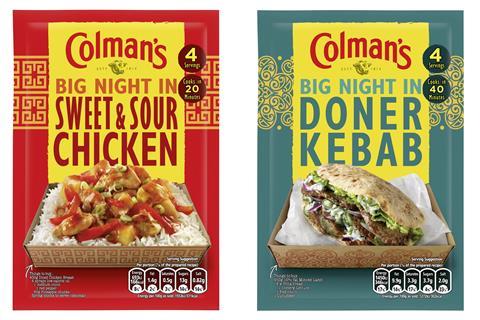 The range would help shoppers create their own ‘fakeaways’, said Colman’s

Colman’s is looking to cash in on the rise in home cooking with a new range of takeaway-inspired sachets.

Called Big Night In, the range is said to take inspiration from the nation’s fastest-growing takeaway meals.

It had been designed to help shoppers create their own ‘fakeaways’ and came alongside a rise in scratch and assisted cooking, said the Unilever-owned brand.

The brand cited research which suggested 500 million more meals would be consumed indoors every week in 2021, following an increase in home cooking last year that saw 72% of meals cooked at home, compared with 60% before the pandemic.

Unilever UK&I foods marketing manager Fikerte Woldegiorgis said many shoppers were looking for creative ideas to break the monotony, and food played a central role in this.

“As shoppers increasingly feel the challenges of the current climate, there is demand for options that are both flavourful and affordable,” she added.

The range has launched at Tesco, with other retailers to follow later this year.