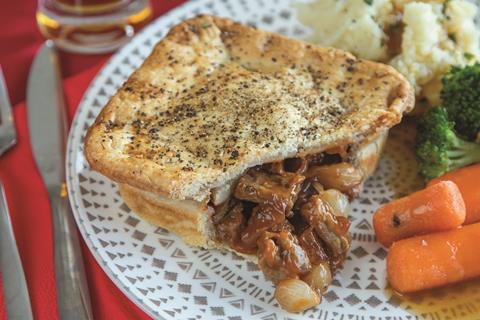 Delice de France has added a duo of vegan pies.

The former is filled with ‘steak-style’ strips and baby onions, in a vegan ale sauce. The latter is filled with cauliflower, spinach, chickpeas and lentils, cooked in a ‘spicy aromatic’ sauce.

“The growth of those interested in vegan or meat reduction diets looks set to continue, and with it there’s an increased expectation to see more vegan options widely available across all categories.”

Brands gear up for Veganuary

It comes as a quartet of big-name brands unveiled meat-free NPD last week ahead of Veganuary 2020.

Cauldron, meanwhile, announced it had made its Moroccan Falafels SKU vegan with a recipe switch-up, and Kettle Chips added a new ’Sheese & Onion’ vegan cheese flavour.