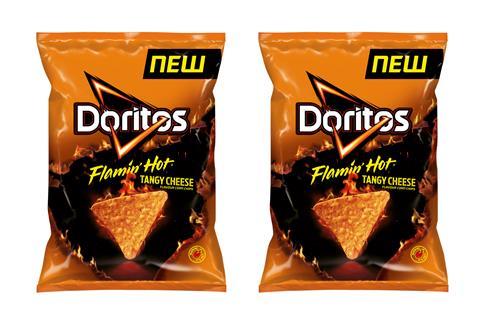 The NPD will hit the big four from 13 January

PepsiCo is to tap demand for spicy flavours by adding Flamin’ Hot Tangy Cheese to its Doritos tortilla chips lineup.

The brand’s marketing manager, Pippa Pennington, said the flavour gave shoppers “the familiarity of Tangy Cheese, a flavour that they know and love”.

She added that tortilla chips were “a big opportunity for retailers”, noting that growth in the savoury snacks market was coming from “innovative flavour, taste and texture experiences”.

This week has also seen PepsiCo bring back Wotsits’ Flamin’ Hot flavour after it was previously discontinued. The brand also unveiled Sizzling Steak – billed as a new take on BBQ Beef.