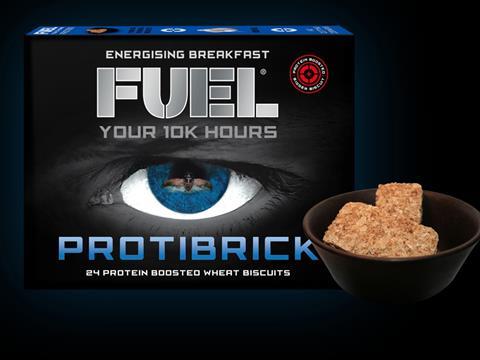 Energy breakfast brand Fuel is squaring up to number-one cereal brand Weetabix with the launch of a protein-enriched biscuit.

Protibrick, which rolls into 520 Asda stores on 28 January followed by 240 Tesco stores next month, is positioned as low in sugar and fat, and high in fibre. Each pack contains 24 square wheat biscuits (rsp: £2.69).

The newcomer, which comes in Fuel’s signature striking dark packaging and features a ‘No Cutting Corners’ strapline, is targeted at males aged 17 to 35 who often skip breakfast. It would add incremental sales to the struggling cereal category by tapping the trend for protein-enriched products, said brand founder Barney Mauleverer. He predicted the NPD, developed in collaboration with Asda’s cereal team, would clock up £3.5m in its first year.

“Other categories, such as energy drinks and confectionery, all have brands talking to our target consumers, something the breakfast aisle is lacking,” added Mauleverer.

Since launching in 2011 with a granola cereal range, Fuel has grown to include milk-based cereal drinks, porridge pots and sachets. The brand had a retail sales value of about £7m at the end of 2014, according to Fuel’s internal data.

Fuel was developing another protein-enriched cereal that would be launched in the third quarter of this year to “challenge another of the big players,” Mauleverer told The Grocer. It was also on the cusp of launching a new brand that would take Fuel owner Fresh Marketing into another food sector “crying out for disruption.”