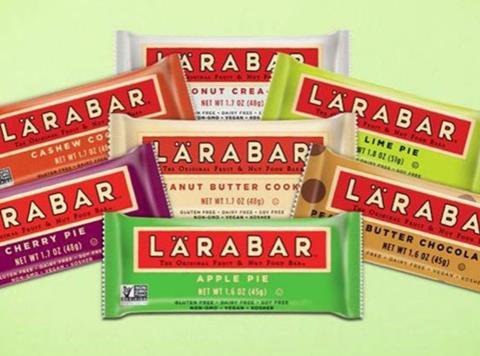 General Mills is to expand its healthier snack bar portfolio next month with the first UK-wide rollout of Lärabar, its $178m brand from the US.

Lärabar’s fruit and nut-based SKUs would be “the first 100% vegan and ‘real food’ brand launch for General Mills in the UK” said the supplier, which also makes Nature Valley and Fibre One.

While details including variants and rsps are yet to be confirmed, the rollout would take General Mills “a step closer to its ambition of being the number-one global snack bar manufacturer” the company added. Its aim was to “supply the growing consumer demand for vegan and free-from snacking options that are minimally processed with no added flavours or sugar”.

The bars will initially be imported from the US, where the 24 options in Lärabar’s core lineup include Cherry Pie, Blueberry Muffin, Chocolate Coconut Chew, and Gingerbread. A box of five 45g bars retails for around $5 (£4).

The brand also produces ranges called Fruits & Greens, Nut & Seed and Organic With Superfoods, as well as bars for children and Bites & Truffles in pouches. Every recipe contains nine or fewer ingredients.

Lärabar was founded in Colorado 18 years ago by Denver native Lara Merriken. The business was purchased in 2008 by General Mills, and now boasts annual sales of $177.7m (£141.4m).

Prior to its acquisition by General Mills 10 years ago, Lärabar was briefly available in selected UK independent retailers.