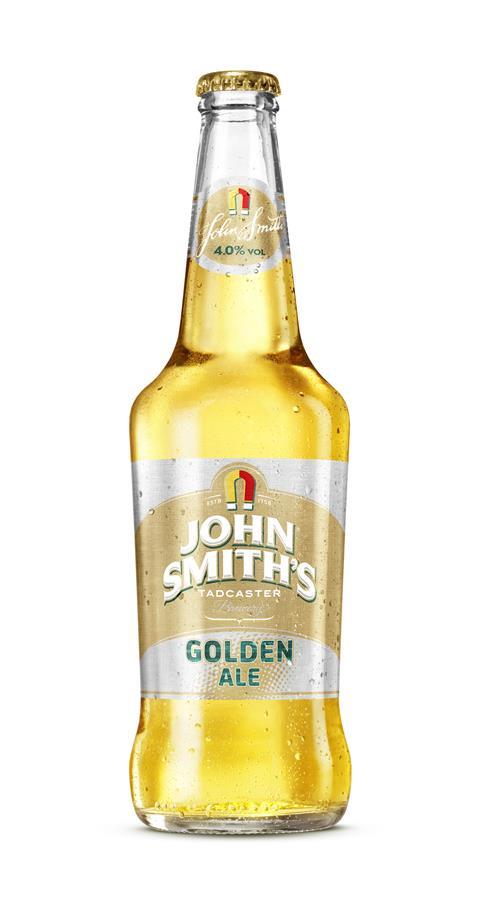 John Smith’s is the latest brand to launch a golden ale variant - its first NPD in 22 years.

John Smith’s is next month following in the steps of other leading ales Guinness and Hobgoblin, which have both launched golden ales in the past year, while number one premium bottled ale (PBA) brand Old Speckled Hen launched its golden variant, Old Golden Hen, in 2011. According to Greene King, which makes Old Speckled Hen, golden ale is now worth £38m and is growing at 10% [Nielsen 52 w/e 25 April 2015].

John Smith’s Golden Ale will be available in a 500ml glass bottle, taking the brand into the PBA arena for the first time, along with 4x500ml can and 10x440ml can packs. Heineken said the drink was intended to appeal to both ale and lager drinkers aged 25-49. Its launch follows a packaging refresh for the brand earlier this year, which was its first since 1993 when John Smith’s Extra Smooth was introduced.

“We know from our research that some consumers are looking for lighter styles of ale that deliver refreshment and depth of flavour,” said Heineken off trade MD Martin Porter.

“We’re confident the new, refreshing and premium style of John Smith’s Golden Ale will deliver this, driving excitement in the classic ale aisle and reappraisal of the John Smith’s brand.”

Along with the rebrand and ad campaign ‘Only Ordinary by Name’, Heineken hope the launch can inject some life into the John Smith’s brand, which fell 5.8% to £78m [Nielsen]. Despite the decline, it is outperforming the classic canned ale category, and is the only classic canned ale remaining in the 100 biggest alcohol brands in the UK off-trade (at number 34).