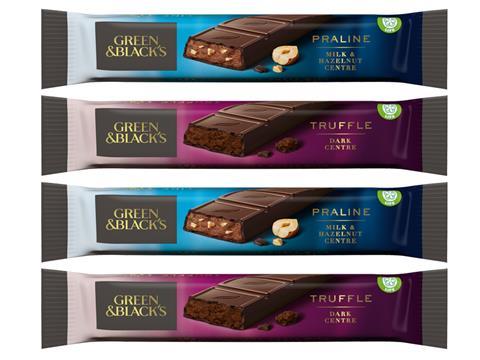 Like other recent Green & Black’s NPD, Truffle and Praline are not organic

Green & Black’s is to launch the first single bars in its 27-year history, in an effort to encourage shoppers to trade up on impulse treats.

“For retailers, the new products offer an unmissable opportunity to drive impulse sales in store, without diminishing mainstream chocolate sales.”

Like other recent Green & Black’s NPD, Truffle and Praline are not organic. However, both are sourced under Cocoa Life, the sustainability initiative that owner Mondelez kicked off last summer to spend $400m (£304m) over 10 years for the benefit of cocoa farmers.

The latest Green & Black’s bars are set to be joined on shelf by a new look across its core organic range. Its first redesign in 11 years will bring it in line with the brand’s recent launches – most notably Velvet Edition, the “velvety”, non-organic range added a year ago to broaden the appeal of dark chocolate.

Davison added: “Appetite for premium is clear, as Velvet Edition achieved more penetration than any other [high-end chocolate] in the market this year and added 1.18pp incremental penetration to the Green & Black’s brand.”