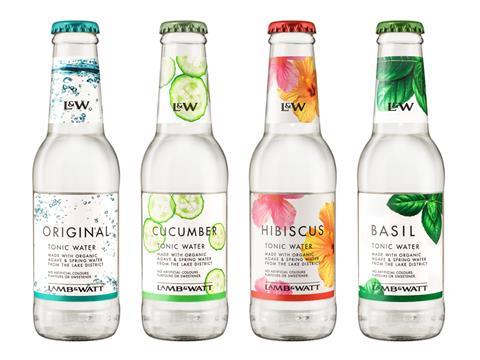 Liverpool’s Halewood Wines & Spirits has made its first foray into premium mixers with the revival of Victorian brand Lamb & Watt.

Aiming to shake up the posh tonic market dominated by Fever-Tree, Halewood has unveiled a four-strong lineup of low-calorie tonic water under the Lamb & Watt brand.

The new range comprises Original, Cucumber, Basil and Hibiscus variants (rsp: £3/4x200ml), with each made with mineral water from Cartmel Fell in the Lake District and sweetened with organic Mexican blue agave syrup. Each contains 34kcals per 100ml.

They are available now to the on-trade, with Booths confirmed as the first grocery listing.

Founded in 1847 as a cordial brand, Lamb & Watt was brought into the Halewood portfolio in 1987 but has been inactive for many years, with its products becoming highly priced collectables.

Halewood hoped the four-strong NPD would be a disrupter to the tonic market, which was “booming” as consumers looked for high-quality mixers, said Leanne Ware, brand manager at Halewood. “We have created Lamb & Watt partly to complement our own expanding premium spirits offering, but also to make our mark on the premium tonic category.”

The launch is the latest expansion move by Halewood this year, which began with plans to open a whisky distillery in Abergwyngregyn, North Wales, in a disused industrial depot. The company then signed investment deals with Lake District brewer Hawkshead and The City of London Distillery.

In March, Halewood announced it had secured a three-year £50m debt facility from Royal Bank of Scotland – which was earmarked to back a growth and acquisition strategy, including adding a “balanced portfolio” of spirit brands to complement the drinks company’s existing names such as Crabbie’s and Red Square.