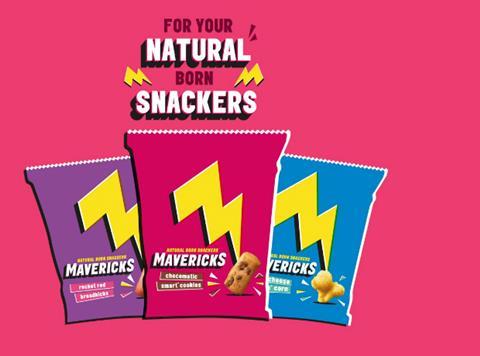 The entrepreneurs behind fast-growing chickpea puffs Hippeas are looking to extend their presence in the healthy bagged snack space with Mavericks, a brand created for children.

The debut products are set to arrive early next year, after Christopher Britton, co-founder and director of Hippeas maker Green Park Brands, incorporated Maverick Makers Snacks in February. The company later took on Green Park co-founder and CEO Livio Bisterzo as a director.

The business has since advertised the proposed launch of Mavericks, a lineup of bagged savoury and sweet snacks that would take on the likes of OddPops, the healthy crisps brand unveiled in June by Ella’s Kitchen for kids aged four to seven.

Earlier this year, the business advertised on the Escape the City job site, seeking ‘inspired, motivated and enthusiastic food lovers looking to change the world of kids’ snacking’. It described itself as ‘already backed by major media partners and investment funding in place’. Brand launch was originally planned for autumn 2018.

The position of MD has been filled by Martin Gormley, who joined Mavericks in May from roofing giant BMI Group. His experience in fmcg includes stints in senior roles at Tate & Lyle, Young’s and P&G.

The launch of Mavericks will almost three years after Hippeas made its UK debut with the aim to “revive” bagged snacks with a healthy offer. Since its summer 2016 rollout, the brand has enjoyed considerable success, winning listings in Sainsbury’s, Asda, Waitrose and Ocado.