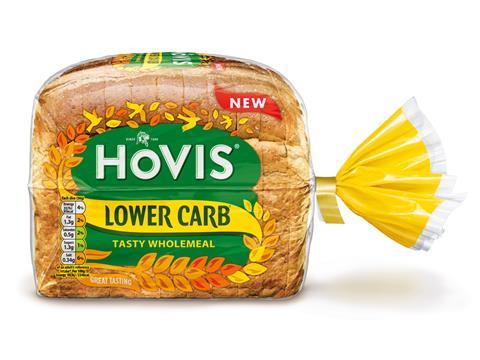 Hovis has become the first major bakery brand to unveil a lineup of reduced-carb wrapped loaves.

The NPD had not required new production equipment, though the bread was baked slower “to give the best texture for this recipe”.

Hovis would not reveal how the carbs had been cut, but said extra wheat protein and fibre had been added for taste.

The range will be merchandised in the main bakery aisle, where its only notable rival will be LivLife from Nicholas & Harris, which offers 14g of carbs per 100g.

Carbohydrates are cited by 31% of consumers as a dominant reason to eat less bread, the brand said. Low-carb diets were among the chief reasons for wrapped bread’s 3.7% drop in value sales to £1.4bn [Kantar Worldpanel 52 w/e 1 January 2017].

However, Hovis has slowed its own decline in recent years through innovation, with a 5.7% increase in average price most recently driving value gains for the brand despite a drop in volumes [IRI 52 w/e 25 February 2017].

Shopper activity, PR and social media will support the NPD’s launch on 19 June. Rsps are £1 for white and wholemeal, and £1.10 for seeded.