Iceland and Tiny Rebel launch beer made from surplus bread 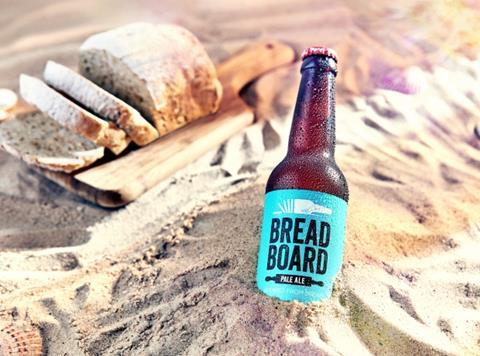 Iceland has teamed up with Welsh craft brewer Tiny Rebel to launch a beer made from the super’s surplus bread.

The brew, called Bread Board, rolled out this week, with 10p from each bottle sold going to charity Surfers Against Sewage, which works to reduce plastic pollution in the sea (rsp: £1.80/330ml).

The drink itself is made with unsold bread from Iceland stores and its Welsh bread supplier. “We replace some of the malt in a brew with the bread, extracting starches and breaking them down into fermentable sugars, so the bread is more than just a flavouring,” said Tiny Rebel MD Brad Cummings. “It’s a really drinkable beer that shows the value and the massive potential of using alternative ingredients.”

The beer itself had “tropical fruit and citrus aromas with a refreshing hopped bite”, said Iceland MD Richard Walker. “I’m passionate about the need to protect our oceans and beaches from the scourge of plastics, and the creation of Bread Board gives us the perfect opportunity to combine our sustainability efforts. We couldn’t have picked a charity with an ethos more aligned to ours than Surfers Against Sewage and we’re looking forward to helping them with the important work they’re doing.”