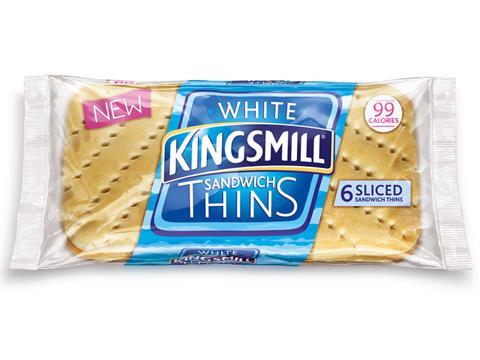 Kingsmill is launching into the sandwich thins market

Allied Bakeries is expanding its Kingsmill brand into the burgeoning sandwich thins market.

The baker is investing £8.4m in its Glasgow site to facilitate the launch of Kingsmill Sandwich Thins, which will be available in white and 50/50 varieties from this month (rsp: £1.29/six).

The square, pre-sliced thin rolls are similar in appearance to the Sandwich Thins rolled out by rival Warburtons in 2011.

The launch comes as sandwich alternatives such as wraps and thins are bringing incremental growth to the bakery market. Kingsmill said research had shown consumers wanted more variety and healthier alternatives when it came to bakery, adding that its Sandwich Thins contained 99 calories each.

“Not only are we investing in our bakery infrastructure to build capacity and distribution, but we are also committing £5m over two years to a significant and sustained marketing campaign, including TV and shopper marketing,” she added.

In March, Warburtons received planning permission for a £20m plant in Burnley, Lancashire to increase its own capacity for wraps and thins. At the time, it said its own sales of sandwich alternatives had grown 87% year-on-year.