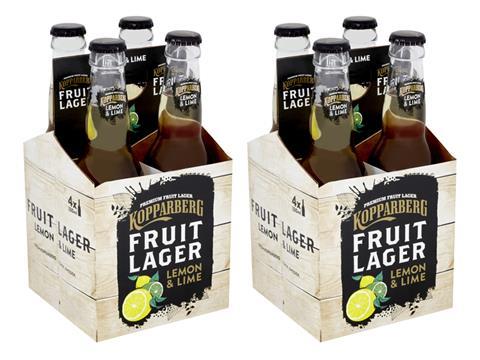 Swedish cider brand Kopparberg is making its first foray into beer under its own name with a ‘stronger than average’ 5% abv fruit-flavoured lager.

Kopparberg Fruit Lager Lemon & Lime will make its debut in Asda at the end of February followed by Tesco and independents from April. It is pitched as a premium brew that contains all the ingredients of a traditional lager, but with a ‘lighter body’ to complement the drink’s citrus flavour profile.

The 5% abv lemon & lime tipple will join lower-strength fruit-flavoured beers of recent years, including Carling Zest and Carlsberg Citrus - both 2.8% abv - and the 2% abv Foster’s Radler, but are “nothing like anything other brewers had produced”, said customer marketing manager Rob Salvesen.

“We wanted to position ourselves apart from both the low-abv fruit lagers and the traditional craft fruit beers that are lower-abv or heavy and ­full-bodied,” he said, adding the newcomer’s alcohol volume reinforced the drink’s “premium positioning”.

The supplier, which launched its first beer, Fagerhult, in the UK last March, will be hoping the launch imitates the success the brand has had in the cider category, where its Mixed Fruit Cider and Strawberry & Lime are the third and fourth bestselling respectively, with sales of the latter up 20.8% to £41.7m and Mixed Fruit growing 2.9% to £49.7m [Nielsen 52 w/e October 2015].

Kopparberg will ­support the NPD with a multimedia campaign comprising outdoor, press, digital and social media activity that forms part of a £6m push for the overall brand, launching in May.