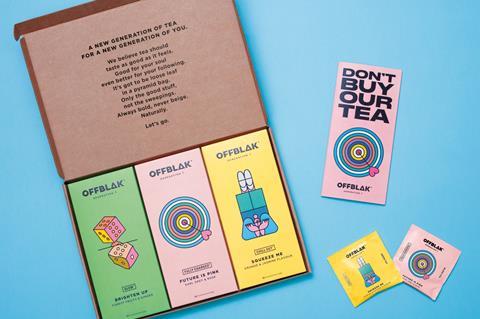 The UK’s raft of direct-to-consumer brands is set to be joined by OffBlak, which aims to “set an exciting new course for tea”.

Launching this spring, OffBlak styles itself as a “lifestyle tea brand”, targeting consumers “driven by beauty, status and experience” with healthier variants such as Future is Pink (earl grey & rose), Squeeze Me (orange & jasmine) and Nicely Spicy (cranberry & cinnamon). Aimed at differing occasions, they are categorised under Fully Charged, Chill Out, Glow or Caff Free.

All come in pyramid teabags packed in colourful slimline boxes resembling premium chocolate bars. The back of each pack includes information on the ingredients, caffeine level, recommended brewing time and what the tea ‘feels like’ – for example, ‘Finishing a yoga session’. 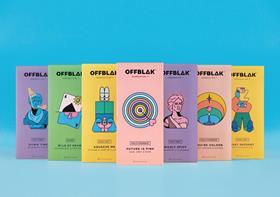 OffBlak wanted to be “more than tea” said founder Dmitry Klochkov. “Today, natural ingredients are a given but often, good-for-you teas miss the mark when it comes to taste.

“Our identity needed to redefine the category and capture OffBlak’s zero-compromise on taste and excitement, while being brave and direct,” he added.

To mark its launch, OffBlak will run the push ‘Don’t buy our tea. Try it’, sending tea samples with Asos and Missguided orders from May.

OffBlak’s visual identity was created by & Smith, which had given the D2C brand the “illustrative freedom that craft beer and coffee sectors have owned until now” said the agency’s creative partner Dan Bernstein.