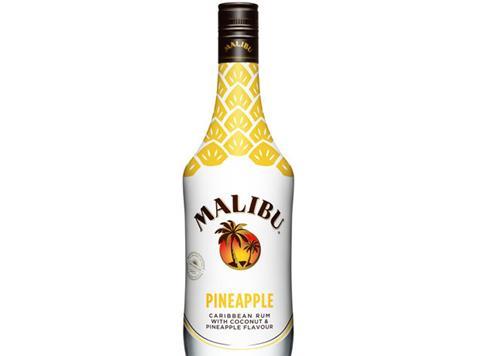 Pernod Ricard is aiming to tap the booming demand for flavoured spirits with the launch of Malibu Pineapple. The variant rolls out this month in a 70cl bottle (rsp: £14.99).

Pernod Ricard said flavoured spirits were the biggest flavoured category in beers, wines and spirits [Nielsen data to 12 September 2015]. Major launches in recent years include Jack Daniel’s Tennessee Honey, which is now among the top 20 spirits brands, with sales up 32.6% to £32.6m [Nielsen 52 w/e 10 October 2015]. Other brands to launch a pineapple flavour include Diageo’s Cîroc vodka. Malibu & Pineapple is also one of four premix RTDs offered by the brand.

Pernod Ricard said it would support the launch with a digital and outdoor campaign and on-pack activations this summer.

“We know pineapple is a hot flavour right now. Our pre-mixed Malibu Pineapple can is living proof. It has generated double digit value and volume growth in the past year [Nielsen].

“Malibu is synonymous with pineapple, which explains why it is one of the most popular mixers bought and consumed with Malibu Original and in a Piña Colada. Malibu Pineapple offers the flavour combination right out of the bottle, enjoyed with lemonade, orangeade or even an ice cream float.”