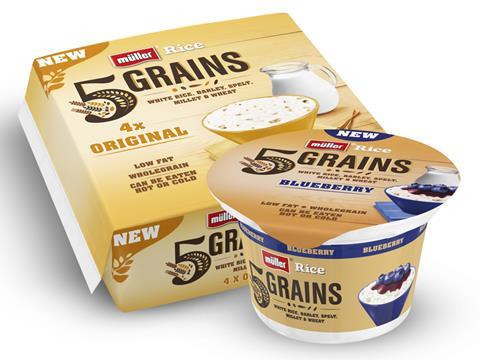 Müller has made its first venture into products containing added grains with the launch of Müller Rice 5 Grains, targeted at “hunger moments” when yoghurts and potted desserts are not traditionally consumed.

The new product contains white rice, barley, spelt, millet and wheat, and will go on sale nationally in original and blueberry flavours on 25 September, in 180g single pots and four-packs (rsp: 95p and £3.29 respectively).

Created to fulfil what Müller calls the eight moments of the “daily hunger spectrum”, when consumers are hungry between meals, the new products can be eaten hot or cold. They formed a “central part” of its category vision, which has identified the potential for £233m growth by 2020 by creating more usage occasions, Müller said.

It comes less than a month after Danone introduced a new range of Activia yoghurts with grains, while Emmi UK launched a new Onken big pot in May, with five different wholegrains.

“If we’re going to grow the category, we need to continually innovate,” said Müller chief marketing officer Michael Inpong. “Our research found a demand for products that are not only filling, but a tasty and low-fat option that can be eaten at various points throughout the day.”