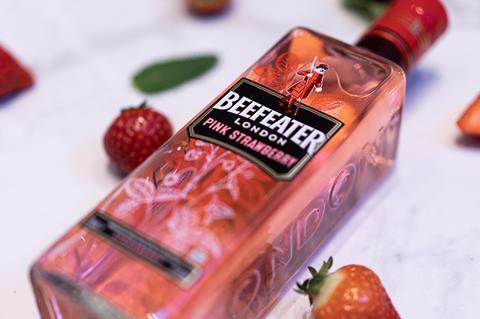 Beefeater Pink has been a major success in the mults

Pernod Ricard is set to challenge Gordon’s in the RTD fixture with a duo of canned Beefeater drinks.

The spirits giant plans to roll out a ‘dry’ and a pink gin and tonic RTD, said Louise Ryan, MD of its Gin Hub division.

It was also working “on something in the background that we think will be perfectly complemented by soda”, she added, amid growing interest in hard seltzers.

It comes as sales of Beefeater have surged across the supermarkets over the past year, thanks in particular to the success of its Pink Gin, which grew sales by £10.3m to £14.5m last year (a whopping 244.2% increase), having only launched in 2018 [Nielsen 52 w/e 7 September 2019].

Pernod Ricard UK MD David Haworth added that while the gin boom was not necessarily drawing to a close, “the battle for survival for a lot of brands is going to take place”.

“You’re going to see some flavours fall out and others come in. The question for gin is the amount of shelf space it gets and how sustainable that is with the proliferation of numerous flavours,” he added.

Pernod Ricard has also announced a slew of sustainability initiatives for the coming year, including turning Ballantine’s Finest packaging “sustainable” within two years, finding a “sustainable alternative” to Royal Salute’s packaging by 2025, and operating the world’s first carbon neutral distillery within two years.

This week it also rolled out a new passionfruit flavour for Absolut, and kicked off a “multimillion-pound” ad campaign for Jameson in the run-up to St Patrick’s Day.