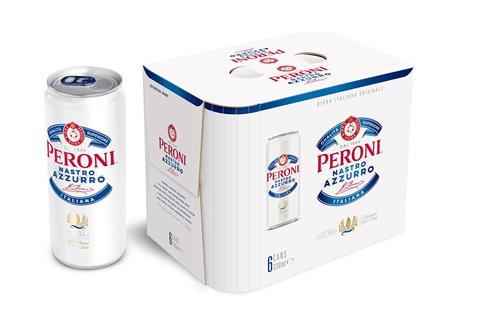 The new cans are aimed at luring incremental shoppers to beer

Peroni is hoping to lure drinkers from other booze categories by pouring its posh lager into RTD-style ‘slimline’ cans, The Grocer can reveal.

The upmarket brew will roll out initially into the big four in fully-recyclable aluminium 330ml cans from April, with an eye to winning space in “highly competitive drinks chillers” and “driving new consumers to the category”. Other mults and c-stores will follow (rsp: £8/6x330ml).

The Asahi UK-owned brand “had the credibility to behave differently and command a premium in the category” said Asahi UK brand marketing director Jo Spencer.

The new cans would appeal to RTD and cider drinkers as well as “a younger cohort of beer drinkers looking for a convenient on-the-go option”, she suggested.

The launch marks the latest in a series of expansions to Peroni, which has been one of the recent star performers of the lager sector. It added a cool £13.2m (10.6%) to its value in 2018, hitting £138.4m and overtaking Kronenbourg to become the UK’s sixth biggest lager brand [Nielsen 52 w/e 8 September 2018].

It earlier this year made its debut in the booming low and non-alcoholic sector with the 0.0% abv Peroni Libera, and sells a gluten-free version of the beer, which has seen value sales across the on and off trade surge by 81% on volumes up 103% over the past year, according to Asahi UK.

But it is not the only alcohol brand experimenting with less traditional can sizes. AB InBev launched its US lower-alcohol beer brand Michelob Ultra in a slimline 355ml can in late 2018. Dutch mega brewer Heineken, meanwhile, is sizing up, with plans to launch its eponymous lager into pint-size (568ml) cans over the coming year.

Read more: what does Asahi’s purchase of Fuller’s tell us about the UK beer market?