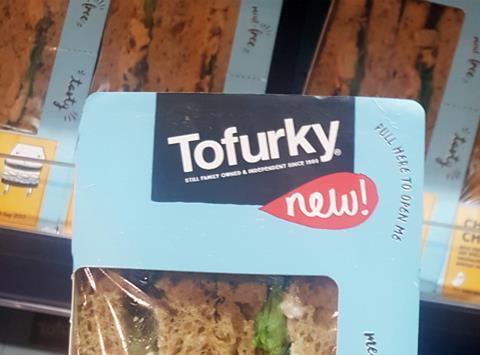 Tofurky, the US plant-based food brand, is set to capitalise on British shoppers’ appetite for on-the-go sandwiches with the launch next month of a vegan range.

Set to land in London’s Whole Foods Markets on 2 October, the NPD came as three billion sandwiches were purchased in the UK each year, while 28% of Brits had reduced their meat intake over the past six months, according to Tofurky.

“With flexitarianism on the rise in the UK, as well as an ever-increasing number of vegetarians and vegans, we have uncovered an opportunity to provide delicious, satisfying, meat-free on-the-go lunch options containing plant-based protein,” said Tofurky chairman Seth Tibbot, who founded the Oregon brand in 1980.

The flexitarian trend has driven growth of meat-free food, with sales up £17.2m last year [Kantar Worldpanel 52 w/e 29 January 2017]. Burgers, ready meals, sausages, and snacks such as scotch eggs contributed the bulk of the success as Brits cut their meat intake.