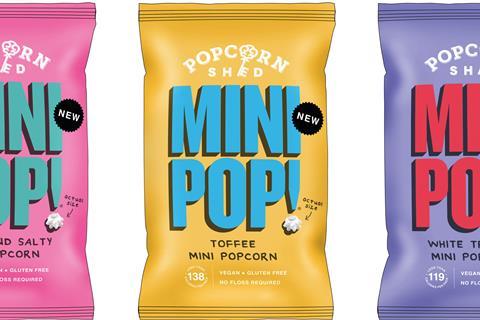 MiniPop will be available from 1 July in five variants

Gourmet popcorn maker Popcorn Shed has unveiled MiniPop – a range of miniature popcorn, which the brand claims is the first of its kind in Europe.

The new snack is made from white corn kernels that pop to around half the size of regular popcorn. It has the same taste but was tenderer, meaning the pieces “virtually disintegrate when chewed” said Popcorn Shed. “This means they don’t get stuck in your teeth, like regular popcorn does, which improves the eating experience.”

MiniPop was also the first fully vegan range of popcorn in the UK, Popcorn Shed added. It was “a healthy snack that not only tastes great but is kinder to teeth and tummies”.

Later this year, Popcorn Shed will roll out what it claims is the UK’s first vegan caramel popcorn. It will be available in time for Christmas in a box format shaped like ‘Santa’s shed’ (rsp: £3.50/80g).

Both innovations come after popcorn suffered its first sales decline in five years. Its value fell by 4.4% last year as volumes plunged 9.9% [Kantar Worldpanel 52 w/e 30 December 2018]. The market’s slump was driven by branded popcorn, which saw volumes dive 15.3% compared with a 1.6% rise in own label.