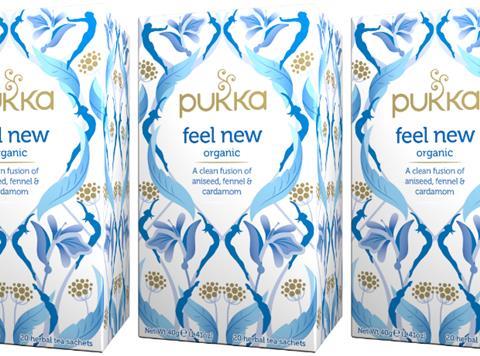 In May 2018, the ads watchdog upheld complaints that the Detox name contravened the CAP Code regulation stating ‘references to general benefits of a nutrient or food for overall good health or health-related wellbeing are acceptable only if accompanied by a specific authorised health claim’.

This meant Pukka was effectively banned from advertising its Detox tea in the UK – although the brand could still sell the variant, which launched in 2004 and contains aniseed, fennel and cardamom.

The Feel New tea (rsp: £2.99/20 bags) is set to be available across grocery by the end of next week, with a new formulation that sees the addition of turmeric and the removal of celery seed. Detox is currently still available in the major mults but is expected to have vanished from UK shelves by mid-2019.

When the variant made its debut, “detoxing had a different meaning” he added. “In recent years, unfortunately the word ‘detox’ has become misused, with many now associating ‘detoxing’ with crash dieting – something we have never advocated at Pukka.

“Our aim is to strike a balance between listening to our customers and being ethically responsible and respectful of the advertising standards guidelines.”

Last year, Pukka enjoyed a 19% rise in value sales to £19.7m, fuelled by the launch of a four-strong range of organic lattes featuring “medicinal-grade herbs and spices” [Nielsen 52 w/e 8 September 2018].