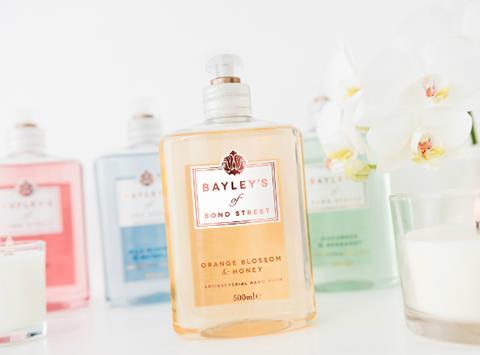 Personal care giant PZ Cussons has unveiled its Bayley’s of Bond Street brand, which is making its debut with a perfumed antibacterial handwash.

The first NPD in a mooted washing and bathing portfolio, the lineup comes in a quartet of variants in a 500ml pump-action bottle: Orange Blossom & Honey, Rose & Raspberry, Cucumber & Bergamot, and Wild Bluebell & Waterlily (rsp: £3).

Available now, each ‘quintessentially British’ fragrance is a contemporary adaptation of scents produced by Bayley’s of Bond Street, the London perfumer founded in the 1700s. It was bought in 1921 by Tom Cussons, the founding force behind PZ Cussons, whose love of orchids is acknowledged on the new range through a stylised flower logo.