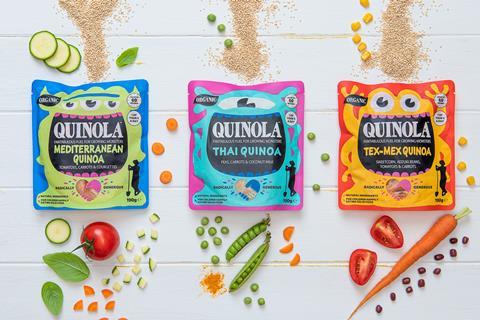 The pouches will roll into Sainsbury’s in early September

Quinola has designed its first-ever range of microwave meals for kids.

The health brand has unveiled a trio of pouches – Mediterranean Quinoa, Thai Quinoa and Tex-Mex Quinoa – due to launch into Sainsbury’s in early September (rsp: £2/190g).

“At the moment if you look at what is designed for kids past stage three, it’s basically fish fingers, frozen pizza and cereals, and chocolate-coated sugarbomb cereals” Quinola CEO James Livingstone-Wallace told The Grocer.

“What we’re trying to do is have something that’s easy for parents who are coming back from a day at work and can just pull one out of the cupboard but is also healthy.

“It’s a market that hardly exists. There’s Little Dish and Annabel Karmel in fresh and frozen that have healthier recipes but, past that, there’s very little choice out there.”

The pouches are billed as having a significantly lower carbon footprint thanks to their packaging – many competitors are packaged in plastic pots or glass jars – and their 100% plant-based recipes.

The flavours themselves had been specifically designed to appeal to children’s palates, which were “a lot more sensitive than adults”, Livingstone-Wallace added.

“For our Thai recipe, for instance, we did some panels of kids and they thought it was too fancy. So we had to simplify the flavours. If you look at young children they will love spaghetti with a bit of tomato sauce, but when you start sticking in chillis or anything fancy that’s not going to please them. Or anything with herbs. A lot of kids, anything that looks green, they just don’t like it.

“As we’ve seen with the government’s new-found interest in childhood obesity, there’s a lot to do in retail in terms of pushing consumers the right way.”