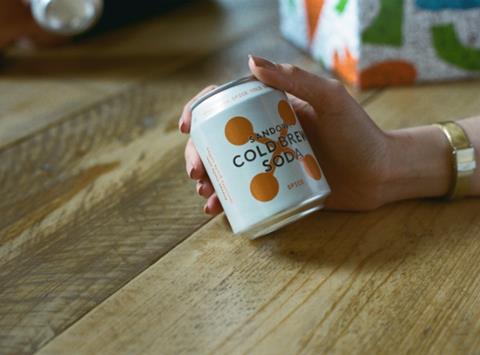 Artisanal cold-brew coffee brand Sandows is preparing to launch ready-to-drink soda with a coffee base.

Two sparkling variants of Sandow Cold Brew Soda will roll out in early April in a 250ml ‘stubby’ can. Both containing cold brew coffee and unrefined golden cane sugar, Citrus and Spice will have an rsp of £1.99 – which was “amazing for a speciality grade coffee drink but still premium for a soft drink” according to Sandows co-founder Hugh Duffie. “Our new cans really help us to meet people in the middle on price.”

Duffie described the Citrus soda as being like “coffee lemonade”, while Spice, featuring orange blossom and ginger, tasted “somewhere between chai and Christmas”. Sugar content is 3.2g-4g per 100ml, and caffeine is 12mg-16.2mg per 100ml.

By using only black coffee, Sandows had “steered away from adding dairy or dairy alternatives”, Duffie said. The brand hoped to persuade buyers to range the drinks alongside “functional competitors like Coke and Red Bull, rather than in the dairy section next to Starbucks and Jimmy’s”.