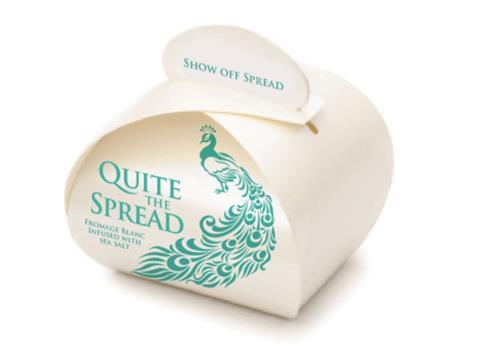 One of the spread concepts designed by Springetts

I’m not one to shy away from a challenge. (Though I have learned to accept them less readily following an incident - many, many years ago - that resulted in me walking the streets of Croydon in stockings and suspenders.)

But I almost threw in the towel before I began when my managing editor asked me to write a particular feature for The Dairymen supplement, which you will find in this weekend’s issue of The Grocer. My task was to find out how spreads – as in butters and spreads – “could get their sexy back”.

A challenge indeed – particularly as I wasn’t convinced they ever had a “sexy”. But there is no denying that spreads are no longer the shining stars of the chiller cabinet – although they were once perceived as the modern, healthy alternative to fatty old butter.

These days, consumer demand for natural, simple products has put butter back in favour – and stealing market share from spreads and margarine.

In fact, as spreads lose ground to butter, more suppliers are adding butter to their spreads. Unilever has launched Gold from Flora, a blend of butter and Flora, and Bertolli with Butter, a blend of olive oil.

And when you walk the spreads aisle it’s easy to come away with the impression of a spreads category that could, indeed, do with a little sexing up.

Despite the thrill I undoubtedly gave a few of the citizens of Croydon all those years ago, sexing up is not my forte – so I turned to Springetts, the design agency behind concepts such as The Happy Egg Co.

They were asked to develop designs that were disruptive and displayed some outside-the-box thinking, while at the same time being grounded in commercial and operational realities. We didn’t want products that would only work in high-end foodhalls – we wanted ideas that would allow the mults to continue offering spreads as they currently do.

And they didn’t let us down.

Springetts delivered 10 designs that ranged from minor – but inspired – packaging rethinks to full-blown re-imaginings of what a spread could be and how it could be presented in store or in the home. But don’t take my word for it, you can view all the designs here.

Here at Grocer Towers we have our favourites – as I’m sure you will. Our managing editor has become mildly obsessed with the concept of Sprods (I won’t spoil the surprise, see for yourself), while I’m a big fan of a design that combines spread with oats.

We would love to hear what you think of the various concepts and whether they inspire any readers to take a fresh look at the category – as a similar exercise in last year’s The Dairymen supplement did for yoghurt supplier The Collective.