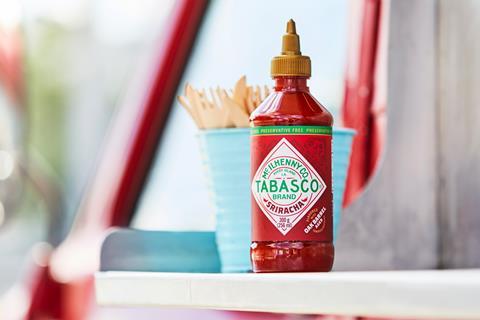 Tabasco is bringing its own take on sriracha to the UK.

The NPD - called simply Tabasco Sriracha - is billed as a “rich, thick and full of flavour” take on the much-loved Thai sauce. It is made with the same barrel-aged peppers used to create the brand’s core sauce, which it said “gives it a signature kick”.

The sauce has been available in the US since 2014, and is made without preservatives, which Tabasco claims “sets it apart from much of the category”. It will roll exclusively into Waitrose from 18 November (rsp: £2.99/256ml).

The move marks the first official retail launch for the brand since 2002, when it rolled out Tabasco Chipotle.

Tabasco was “excited to finally share our own version of such a delicious and versatile sauce with brand fans and food lovers in the UK,” said Harold Osborn, president and CEO of Tabasco owner McIlhenny Company.

The brand was “always at work developing potential new products from our flavour lab on Avery Island”, he added.

“Some are based on existing styles and some are entirely new, pulling from influences from around the world.”