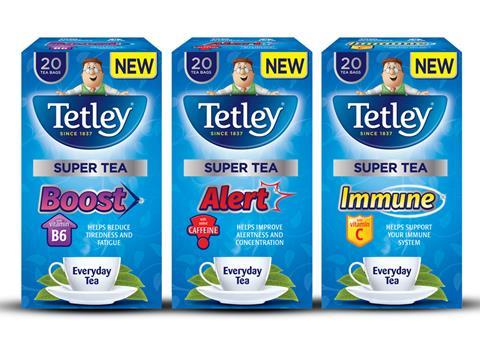 Tetley is launching what it claims to be the UK’s first functional black teas with Efsa-approved health claims, in a bid to replicate the success of its functional fruit and green teas, backed by £5m push.

The Super Everyday Tea range, based on the brand’s original blend, includes two black teas with added vitamins: Boost with vitamin B6, and Immune with vitamin C. They were the first functional black teas in the UK with Efsa-approved health claims relating to fatigue and immunity, said Tetley.

The range is completed by Alert - a blend containing Assam for a richer taste, together with extra caffeine to match the amount found in a medium cup of coffee.

The functional focus formed part of Tetley’s strategy to reignite the nation’s passion for tea by offering something new with a “genuine benefit”, said senior brand manager for innovation Alex Snowden, adding the teas would appeal to younger consumers who had been turning to “other drinks”.

Snowden said Tetley hoped the brews would perform in line with its functional Super Green and Super Fruits teas. The former had generated £1.7m in sales since launch in March last year [Nielsen 52 w/e 23 April 2016], with the fruits line achieving the same rate of sale, he said. “If we can repeat this with Tetley Super Everyday, we have a real chance of boosting the fortunes of the black tea sector.”

TV, print and outdoor activity for a £5m push will start in September.