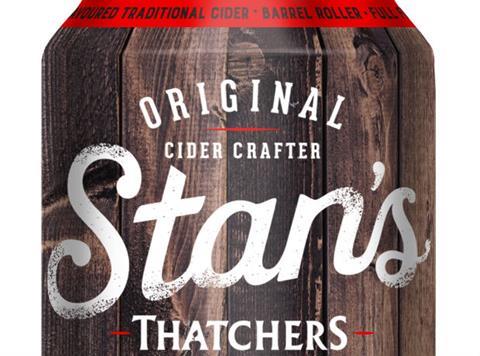 Thatchers has grown its traditional cider portfolio with two new variants and renamed it Stan’s in a nod to second-generation cidermaker Stan Thatcher, grandfather of the company’s current MD.

The new lightly sparkling apple duo, rolling out this week in 330ml can format, consists of Leaf Twister - a 5% abv medium-dry cider, alongside 6% abv Barrel Roller, which is described as a “robust but smooth” cloudy tipple (rsp: £1.99). It marks the first cans to be introduced under the Somerset-based brewer’s traditional range.

The NPD and change of name formed part of a “rejuvenating strategy” for Thatchers’ traditional cider, according to MD and fourth-generation cidermaker Martin Thatcher, Stan’s grandson.

“My grandfather was a pioneer, and it’s therefore fitting that we are introducing our first two canned traditional ciders in his name,” he said, adding apple cider and craft continued to be the key category drivers.

Positioned as an “excellent food match”, Leaf Twister is pitched as ideal with fish and meats, game and a hot curry, while Barrel Roller was perfect with ‘hearty food’ such as lasagne and meat pie, according to Thatchers.